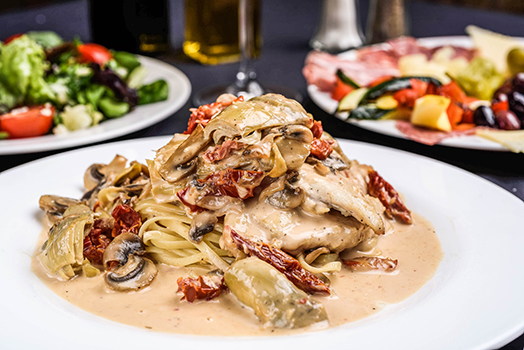 Sadie Tronco, born of Charles and Anna Serio Carnaggio, on February 18, 1901, moved to Columbia with her parents and siblings around the year 1910. Charles Carnaggio owned one of the first fruit stores in Columbia, located on Gervais Street close to Seaboard Railway Station.

During World War I, James Tronco was sent from his home in Philadelphia to Camp Jackson as a medic. There he met Sadie in her father’s fruit store and they were married in 1918. They moved to Philadelphia and lived there for a few years before moving back to Columbia in 1930. They had four children- Joe, Charlie, Carmella and Anna Rose. Sadie and Jim opened a fruit store at 1901 Main Street. They named it Iodine Fruit Store because South Carolina was known for the iodine in the soil. A few years later, they opened another fruit store at 1712 Main Street. During World War II, when so many Northern soldiers of Italian descent were stationed at Fort Jackson and were becoming homesick for their own mother’s cooking. Sadie began cooking spaghetti and meatballs for a few of them who had become friendly with the family. Thus was born the first Italian restaurant in Columbia. Sadie, or Mama Tronco, as she was affectionately called by her friends, introduced pizza to Columbia and actually had to give it away because virtually no one knew what it was.

Today, Villa Tronco, its named changed from Iodine Fruit Store to Iodine Grill and Tony’s Spaghetti House, to the present name, is still serving Mama’s treasured recipes. Mama Tronco, at age 87, was still active and came to the restaurant every day to see her friends until her death in 1988.

As we celebrate over 70 years of serving Columbia, Joe and Carmella’s children, Bonner and Carmelina, are active in the family business. Bonner and his wife Kristen have added the family’s 5th generation, with their sons, Joseph Bonner (Tripp) and Donovan Peter, and their daughter Jorja Harris. Carmelina was married to Luis Nieto in July 2011 and has taken over baking Carmella’s Famous Cheesecakes from her grandmother.

The building, occupied for so many years by the family, was declared an historic landmark and the back dining room was restored to preserve as much of the original building as possible, including the floor, brick, skylight and stable doors. The façade was restored in August 1983. In June 2012, the façade was renovated again. The adjoining building was remodeled to add a new store front for the main entrance of the restaurant. Our family is proud to say that Villa Tronco has been a tradition in Columbia since 1940. We shall endeavor to carry on as our beloved founder, Mama Tronco, did for so many years.